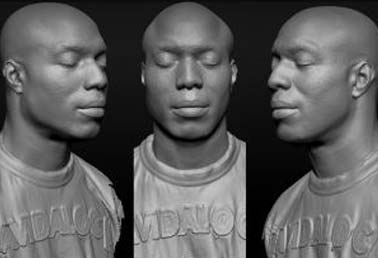 Infinite Realities, based in Woodbridge, Suffolk, creates 3D computer models of human figures for animation by video games developers and film-makers. Founder Lee Perry-Smith has ten years’ experience as a character artist in computer games, working on titles released for the PlayStation 2 and Xbox. He decided to set up his own firm in 2008. Infinite Realities’ clients include leading global games publishers such as EA and Ubisoft, and agencies working on behalf of major consumer brands including Puma and Phillips.

Following outside investment, Infinite Realities has been able to purchase some sophisticated scanners that can capture every detail of human faces and bodies, providing a ready-made basis for developing character models based on real people. “Using the scanners makes my job a lot easier,” says Lee. “It condenses a process that used to take two weeks down to two hours. But I need people to scan, so the next step was to find some models I could work with.”

Lee approached Models Direct on the basis of a Google search, looking for a diverse selection of adult models. “I was looking for a group of reasonably good-looking people with any look or ethnic background,” he says. “Models Direct offered a selection, and I chose the ones I wanted to work with. In the event, some couldn’t make it, but others filled in for them.”

Although the model specification was broad, budgetary constraints were tighter, as is often the case for smaller firms. “I gave Models Direct a quote that I’d had from another agency in London and asked them to match it – which they did, really well,” reveals Lee.

On the day, the models’ task was simple but unusual. “Basically, they had to sit in front of a bank of four cameras while I took pictures of them modelling a range of emotions and expressions – sad, happy, surprised and so on,” explains Lee. “Once the data from the images is processed, we have a 3D version of their face stored in the computer.”

Never having worked with models before, Lee confesses to feeling a little nervous before the shoot. “I was really apprehensive,” he admits. “But I was very pleasantly surprised. I met some really nice people, and the vast majority of them were really good. They were very attentive and did exactly what they were asked to do, making the whole process smooth and easy.”

The scans obtained allow Lee to build up a database of “ready-made” characters that can be used to meet future client requirements. Features from two different models can even be blended together to form a composite character. “Each model signs a release, and I seek their permission to distribute the scans to other artists,” he explains. “However, it’s not like their likeness appearing in an image library – very few people have the skills to do anything with the data I create.”

Lee sums up the experience of working with Models Direct. “It was fantastic,” he says. “Everything was brilliantly organised, with all the models turning up on time. I’d use them again, without a doubt.”