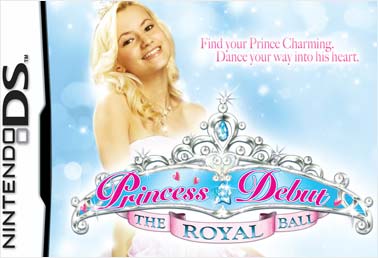 Midway Games is a legendary name in the world of electronic entertainment, having created some of the most famous and successful arcade games of the 1980s before moving into the home gaming market in the 1990s. Sadly, Princess Debut proved to be Midway’s swansong, as declining sales as a result of the recession drove the veteran game publisher into bankruptcy shortly after the game was released.

London-based Eye-D Creative provide communications and marketing solutions in print, interactive media and video. Having already worked on a number of key Midway product campaigns, they were approached by the company once more to produce the packaging for Princess Debut, a ‘rhythm action’ game for the Nintendo DS handheld console. Released with manga (comic-book) visual styling in Japan and aimed squarely at young female gamers, the game needed to be repackaged in order to maximise its appeal in Western markets.

Midway liked to retain close control over their games’ presentation, and had provided Eye-D with a fairly precise brief in terms of the visual style they were looking for: a classic European princess with blonde hair and blue eyes.

For Will Little of Eye-D, being asked to come up with a princess was a new experience, but it didn’t take him long to hook up with some potential providers. “We had a brief from the client, but in terms of where to find models we had a completely blank slate,” he says. “So we went to Google and got in touch with some modelling agencies.”

Will explains why Models Direct stood out at the agency selection stage. “They seemed to have a good selection of girls who fit the bill for us,” he says. “They were also very helpful and proactive, which was great because we were working to a very tight schedule – we only had a week to get everything sorted.”

With the contractual negotiations complete, Models Direct submitted a shortlist of possible models. This was reduced to two main contenders by Eye-D and Midway made the final selection: 19-year-old Yasamine.

On the day, Yasamine had to travel to a studio in Hackney, where she had her hair and make-up styled and donned her princess ‘ball gown’. “Yasamine arrived on time and was well presented,” says Will. “She did a great job, very professional. We got a couple of shots that fit the bill perfectly, conveying just the impression that we were after.”

The finished packaging for the Princess Debut game shows Yasamine on both the front and the back of the pack, looking every inch the fairytale princess that Midway were looking for. As Will confirms, the results met with universal approval and Eye-D have every intention of returning to Models Direct when the need arises. “The client was very happy, and so we were we,” he affirms. “We’d definitely use Models Direct again.”