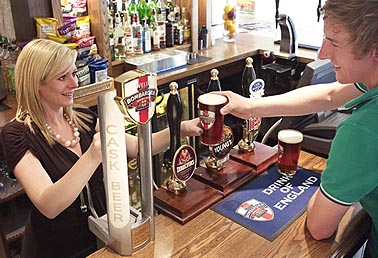 Charles Wells is the holding company of leading brewer Wells & Young’s and the Charles Wells Pub Company based in Bedford, UK. Originally founded in 1876 and still one of just 32 independent family brewers in the UK, the company now manages a portfolio of ales and lagers including Wells Bombardier Bitter, Young’s Bitter, Courage Best and Directors, Wells Eagle IPA, Red Stripe Jamaica Lager Beer and Kirin Ichiban, the renowned Japanese lager. It is also the sole UK distributor of Corona Extra, the world’s fourth-largest beer brand.

Charles Wells’ annual report is produced by Evolving Media Ltd, an integrated agency also based in Bedford. For the 2009 edition, we were approached by Evolving and asked to source 25 men and women to be photographed in the company’s pubs. The resulting imagery would be used to bring colour and interest to the report.

Evolving Media had previously used local modelling agencies, but took the decision to work with Models Direct as the smaller players’ limitations became apparent. “During 2008, we started to become frustrated with the quality and variety of the models provided by our local agencies,” confirms Martin Scovell, a Director at Evolving. “We were also disappointed to make bookings for perhaps half a dozen models and find that three of them wouldn’t turn up, significantly reducing the value of an expensive day’s photography. When you’re working to a client’s budget, that kind of problem can really compromise what you can achieve.”

Models Direct offered a pleasant and productive contrast. “From the start, they stood out in terms of their interest in our assignment and their willingness to find what we wanted, and they were also very nice people to deal with,” says Martin. “They offered a reasonable selection of models, were helpful and proactive in delivering a shortlist based around our specification and sorted out the logistical side very effectively. On the rare occasions when there were problems with models arriving late or not turning up, they worked very hard to resolve them.”

The key challenge for Evolving was to bring life and character to the pub locations that would feature in the report. “A pub needs people to bring it to life, or it’s just an empty room,” Martin points out. “So when we have to shoot a number of pubs for the annual report, we usually take models with us. That’s partly because you can never guarantee when a pub will be busy at the time of day we arrive to take the photographs, and partly so we can set up shots that feature specific brands, or particular aspects of the pub trade such as food, and use the real customers as ‘background’.”

Obviously, the models need to be attractive, but they must also be credible, and look like they might be found in a pub. There were several other requirements as well. “Drinks industry best practice rightly insists that people pictured in pubs must look well over 18, and ideally over 25,” explains Martin. “We also needed the appropriate ethnic mix, and a good spread of ages. Models Direct did a good job of meeting the brief, and on top of that, their models were nice to work with, with positive attitudes and a willingness to get involved. We were very impressed.”

A total of 25 models were provided for four photo shoots over two weeks in a number of different pubs. “Models Direct sent a shortlist for each of the days we had planned, taking location into account to minimise our travel costs. We used the shortlists to select six to eight models for each day and Models Direct made all the arrangements, offering replacements when our chosen models were double-booked.”

A total of around 500 photos were taken in all, which were then whittled down to around 40 images for use in the annual report. “Everyone was pleased with the results,” says Martin. “We got a nice cross-section of styles that illustrated everything we needed, and we didn’t have to do any extra photography.

“The general feeling was that Models Direct offered a very good service and we’d definitely go back to them again.”